The Plant Paradox Cookbook by Dr. Steven Gundry was just launched and everyone is already raving about it, plus last time I checked, it was #3 New York Time’s Bestseller. The carrot cake muffins were on my priority list because carrot cake was one of my favorite cakes, and since the Plant Paradox program suggests only raw carrots are ok to eat, I did not attempt to break the rules. And I’m not going to complain.

A carrot cake that is basically a delicious fat bomb

In the good sense. I asked my sister to calculate the macros for me and it is 81% fat, 10% protein and 9% carb. This is not something I do, but every now and then I get curious about a recipe. Anyway, back to The Plant Paradox Cookbook, I love it. It’s going to sound weird but I love a book with beautiful pictures. And I can’t cook from any recipe that doesn’t have a picture. I guess that explains why I ended up being a photographer. The lectin free Carrot Cake Muffins are on pages 96-97 and because it wouldn’t be fair to post the entire recipe (nor legal I might add), I will just tell you my experience with making this recipe and few modifications I made. Also, just a little note about carrots, it is slightly confusing that on the YES Please list, carrots are listed only raw, but there are several recipes where Dr. Gundry uses them. From previous conversation on this topic, the idea is that if have normal insulin levels they are not an issue in moderation and slightly cooked, but if you are pre-diabetic or diabetic  you want to be careful and check you insulin levels for cooked carrots, or better not have them at all.

So here are the modifications I made:

OIL – The recipe asks for either avocado or MCT oil and I used MCT oil (I’m so happy I found a use for the expensive bottle I bought and never used).

MILK – I used hemp milk instead of coconut milk. No specific reason, I just like hemp milk and sometimes I don’t want everything to taste to coconut-y. Later edit: I made them several times with coconut milk and they are perfectly good.

SPICES – The recipe asks for ground cinnamon, ginger and nutmeg, but I have a magic little ingredient that worked perfectly for these muffins: Daily Turmeric Tonic from Further Foods. It has turmeric, cardamon, clove bud, ginger, black pepper fruit, and a couple more and it taste divine. I still added a sprinkle of freshly grated nutmeg.

You can buy the Daily Turmeric Tonic and Marine Collagen using the code CREATIVEINMYKITCHEN10 for 10% discount on your first order.

SWEETENER – This is an area where I always make modifications, because I seem not to have such a big sweet tooth after all and the normal recipes are too sweet for me. So, I replaced 1/3 cup of Swerve with 1 1/2 tbsp Lakanto golden sweetener (Monk fruit). It is a big reduction but I find the result perfectly sweet, I would never add more than that to this recipe. Later edit: I’ve made this recipe several times already and sometimes I use Swerve, sometimes mink fruit, the result is that same. I still add very little sweetener in general.

Other than these three changes, mines too 25 minutes to bake (the book says 12 to 18 minutes) but I suspect this to be because of two reasons: 1) my oven is weird at small temperatures (like 350F) and 2) my measurement of flour might have been a bit rushed, I should have pressed that flour in the cup and add more on top. So next time I’ll make sure I pay attention to this step.

LATER EDIT (FLOUR MEASUREMENT): This is the most important edit, the reason these muffins might come out too moist / soggy, is because they need more flour. We tend to measure almond and coconut flours just by adding them to the cup, but in this particular case we need to press the flour down and measure them packed (you will see once you press down with your hand or a spoon how much more space you make).

I guess that’s pretty much it, I loved the end result and I’ll definitely make the carrot cake muffins again. And some more pretty pictures. 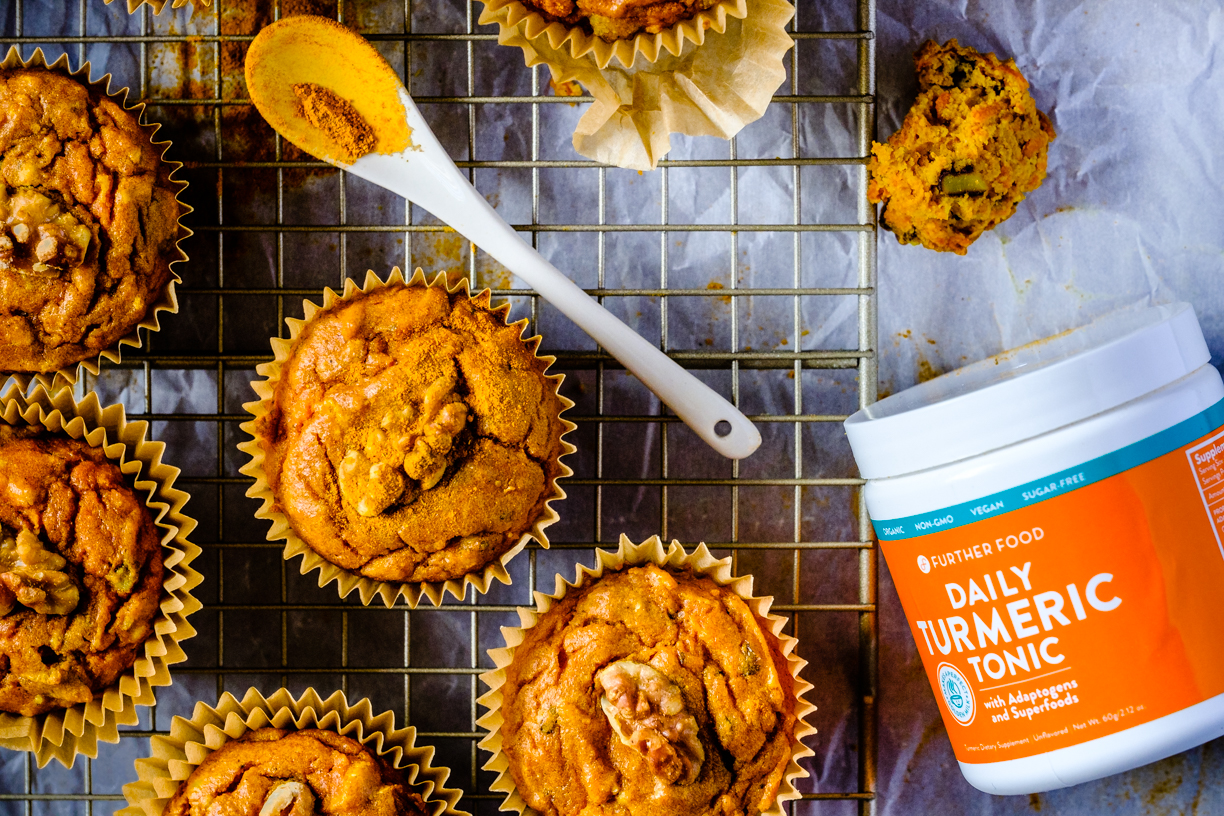 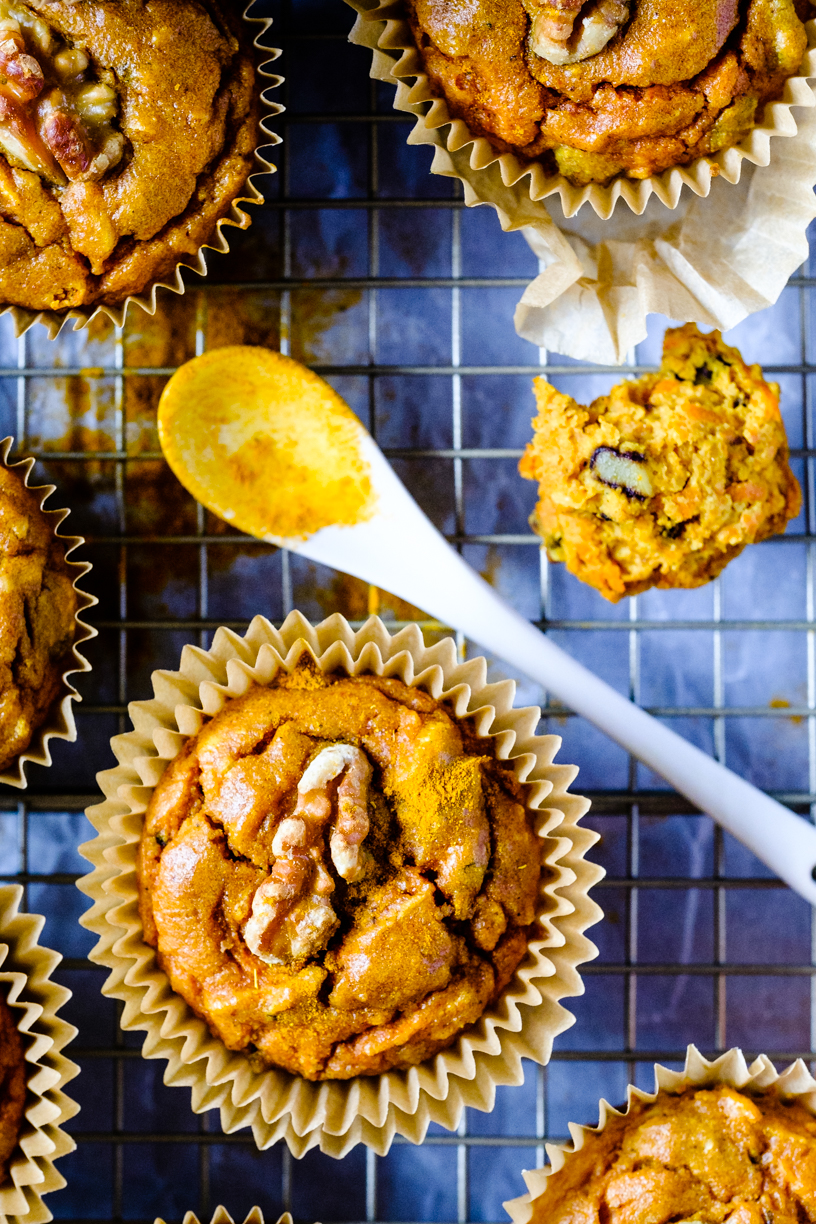 Shop Creative in My Kitchen How to Make Hemp Milk How to Make: Homemade Sauerkraut with Red Cabbage and Carrots

GundryMD Save 40% on Lectin Shield

Copyright © 2021 Creative In My Kitchen